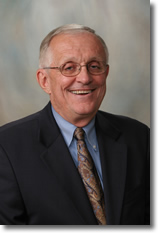 Jim Woster of Sioux Falls, who has spent most of his life among livestock and farmers, is this year’s MVP in Agriculture, a recognition presented by the South Dakota Corn Growers Association (SDCGA).
The award, given to Woster at the SDCGA’s 25th annual meeting in Sioux Falls, recognizes an individual or organization that has helped achieve common goals and create milestones and advancement in the agricultural industry.
“Jim is an outstanding advocate for agriculture. He always has a positive message and he delivers it with a sense of humor,” SDCGA President Gary Duffy said.”Wherever he goes, people know him. He’s one of South Dakota agriculture’s most-recognizable personalities.”
Woster worked 42 years at the Sioux Falls Stockyards, first as a cattle buyer and then as a reporter of the daily livestock prices on radio and television. He also has served as a master of ceremonies and story teller at numerous agricultural events.
A Lyman County native, he grew up on a cattle and grain farm north of Reliance. He graduated from South Dakota State University in 1962 with a degree in animal and range sciences and did two years of postgraduate work in ruminant nutrition.
Woster does public relations work for the South Dakota State University Foundation and Avera McKennan Hospital. He also produces Corn Comments radio commentary, writes a column for the Tri-State Neighbor and serves on the board of directors for the South Dakota Hall of Fame. He also was co-chairman of the Events Center Task Force.