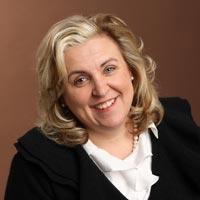 Lisa Richardson became executive director of the Corn Utilization Council in 1997 and also took over that position for the Corn Growers Association when the two organizations combined staffs. She was instrumental in bringing the two boards together to combine forces for the betterment of the industry.

Lisa looks out for the interests of the association’s 1,500 members and oversees federal policy issues. She administers rules coming out of Washington and makes sure farmers know how they will be affected by policy changes and updates. She also decides how the Corn Growers will respond to various issues.

Lisa is known for having a good grasp of “the big picture.” She stays on top of new issues and is good at sensing what’s coming down the road. The corn organizations will be dealing with railroad issues, water issues, access to the market place for bio traits, and best management practices, among other things.

Ethanol will continue to be a major part of the corn industry. Under Lisa’s leadership, South Dakota Corn played a key role in the development of the state’s farmer-owned ethanol plants. South Dakota now processes more than 380 million bushels of corn into ethanol annually. Lisa has served on a number of national, state and industry boards.

The Brookings native is a graduate of South Dakota State University. She and her husband, John, live in Sioux Falls with their two daughters, Suellin and Sarah. When she’s not working, she’s busy with her daughters’ many activities.