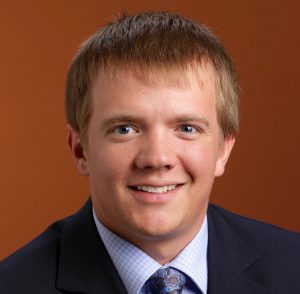 The Winner High School graduate attended South Dakota State University, where he earned a bachelor’s degree in agricultural business in 2013 and a master’s degree in economics in 2014.

Jorgensen and his family operate Jorgensen Land and Cattle (JLC). They raise corn, soybeans, wheat, grass and forages (alfalfa and oat/peas), and also have pasture land.

Growing up on the family farm, Jorgensen said he always had a dream of working there. “It has been a passion of mine,” he said. “Never once in my life have I considered another profession.”

When he’s not busy, Jorgensen spends time with his wife, Ashley, and son Hayes. He also enjoys hunting and fishing.