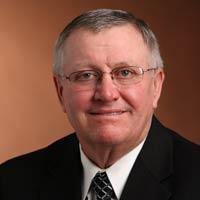 Doug Noem’s start in farming dates back to 1970 when he was in high school and had a few cows of his own. Two years later, he rented 100 acres from his grandfather, and from there his operation grew. Today, he has a diversified crop and livestock operation near Bryant.

Noem joined the South Dakota Corn Growers Association board of directors in early 2012, taking over the District 3 seat.

He said the most important issue facing today’s corn producers is to understand that agriculture is an easy target for more and more people as each generation gets further and further away from the farm.

“Our job is to try to keep the public educated that we are indeed the consumer’s friend,” he said.

Noem attended Lake Area Technical Institute in Watertown. He chose farming as a profession because he loves the lifestyle, the challenges, making his own decisions and raising a family on a farm. He and his wife, Kathy, have two sons, Shaune and Troy; three daughters, Amy, Jessica and Heidi; and eight grandchildren.

Noem has a long list of public service: president of the local cooperative; member of the Pork Producers public policy committee; advisory board for Glacial Lakes Energy; clerk on the township board; church president. In his spare time, he likes to hunt, fish and show cars.